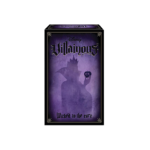 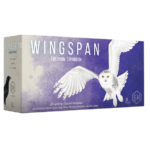 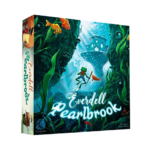 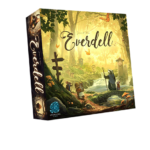 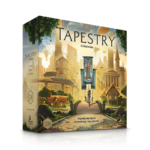 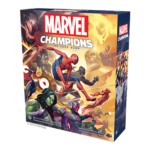 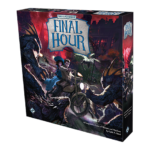 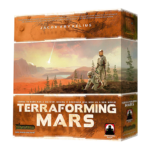 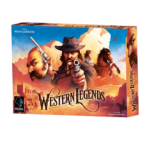 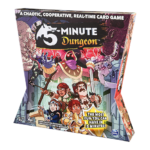 Who hasn’t wanted to be a dragon? Perhaps as child running around the back yard pretending you were breathing fire, flying around and destroying whatever lay within your path. When I came across a game that gave me the opportunity to live out this childhood dream, I couldn’t resist the temptation.

Today, we will be looking at Dragoon, an action strategy game produced by Lay Waste Games, designed by Jake and Zach Given with Art by Nick Nazaro.

Dragoon is a game for 2-4 players and plays in around 30 minutes.

At its heart Dragoon is an area control, action point, dice rolling game that allows its players to take on the persona of a Dragon with one goal – make the lives of humans everywhere miserable. On your turn you take three actions which can be a combination of moving, claiming a human village as your own, destroying a village, stealing gold or gaining a new action card which you can then play at the appropriate time to wreak even more havoc. The first dragon to have 50 pieces of gold stashed in their den wins the game.

In terms of components, Dragoon stands out as being unique. The board is printed on a large square cloth which feels a bit like a treasure map, and as the game ages and the cloth becomes more and more tattered the impression will only be accentuated that in your hands you possess an ancient map that has been passed from generation to generation. The score track is also printed on cloth but it also doubles as a large cloth bag, which easily stores all the components allowing you to do away with the box and instantly make Dragoon a travel friendly game.

The miniature dragons, dens and claim tokens are stunning and come in four colours red, aqua, off white and yellow. Each colour has its own drawstring cloth bag in which all the pieces can be stored. The moulds are faultless, and you can see that this was a work of love for the publisher, with simple yet defined looks given to each miniature. The cards feel good in hand with a linen finish and a little weight that feels like a premium production. The artwork is simple yet bold which makes the game stand out and gives it life. The cardboard town/city tiles come pre-popped and again like the cards are of great quality with artwork befitting of the theme. Finally, the box is lined with a foam insert that has spaces for all your game pieces to store away in and provides enough protection to prevent your pieces moving around when the lid is closed.

My only complaint about the components are the dice, they do not look like they belong to the game. They feel like an afterthought in the design process where they got to the end of production, remembered they still needed dice and just popped in whatever they could find. Considering the effort that was put into the rest of the components I am surprised that same love was not extended to the dice.

Beside those dice the game components are stunning and impressive though.

Each game of Dragoon is played over a series of rounds. Each round consists of three main phases the Populate Phase, Action Phase and finally the Tribute phase.

In the Populate phase new villages are added to the map. This is done by rolling the two dice which provide the coordinates on the 6 by 6 square grid that the map is divided into. If a village already exists in the rolled co-ordinates then village becomes a city and if a city or dragon den is there then the thief steals three gold.

The Action phase is the main part of the game and where most of your time will be spent, with each player in clockwise turn order taking a combination of 3 of the following actions:

After each player has finished taking all three of their actions, the Tribute phase commences.

During the Tribute phase each player will roll one die for each city/town they control and claim gold depending on the result of the die roll, the higher the roll the better your reward. Rounds continue like this until one dragon reaches 50 pieces of gold. Once this condition has been met the current round is finished and the Dragon with the most gold is crowned the winner.

If you are looking for a strategic game where you can plan and plot your way to victory then Dragoon is not the game for you. Instead, Dragoon is all about your luck on dice rolls and the cards that you randomly draw from the draw pile. So, no matter how hard you scheme and plot your best laid plans can easily be foiled with a bad roll or an extraordinary roll from your opponent.

Whilst the idea of playing a game that is just based on the luck of the draw may not be everyone’s cup of tea, it has its positives. One of them is that the simplicity of Dragoon makes it accessible to all ages, you can play this game with your children or you can play the game with your grandparents and because of the element of luck you don’t need to be strategically minded to be in it to win it. The randomness adds chaos which complements the theme – I mean show me Dragon with a well mapped out play by play plan on how they intend to make the lives of humans miserable. Most dragons I’ve met just go around breathing fire on whoever they want, whenever they want, it’s just what they do.

Some may wonder what’s the point of just playing a game where it doesn’t matter how hard you try the winner will be determined by the random roll of a die? Well for me what makes this game fun is the chaos that is caused when four dragons run rampant across the map burning down villages, stealing gold, terrorising humans and by the time you realise ‘Hey, I’m playing a very random game without much of a point’, the game is already over and all you can remember is the carnage you left behind. And it is the short time it takes to play the game that makes the element of luck enjoyable.

Whilst Dragoon will never be a top 10 game for me it has a place in my collection. In my heart I am a complex Euro gamer, but the problem with these types of games is they need me to be alert, to think on the fly, strategise, make plans, rethink plans and this takes so much mental leg work that by the end of the game I’m mentally pooped – and it is when this happens that Dragoon excels. I can open Dragoon, easily teach it and then I just sit back and randomly destroy stuff. I am a dragon after all and that’s what we dragons do.

I would happily recommend Dragoon but with the following caveats. For the serious gamers this will never be the prime-time game your group starts the night on. Instead it’s the game you play when you’re all a little braindead and just want to have fun and destroy stuff. For the family gamers this is a perfect choice to play as it is simple to learn and the element of luck evens the playing field giving everyone at the table an equal chance of winning no matter their age or experience.

Dragoon is a beautifully produced game that is different and stands out when it is set up on the table. Its uniqueness will catch the attention of passers-by and will draw people in, while the simple nature of its gameplay means it is easy to teach.

The component designs not only complement the theme but make it easy to play anywhere and on any surface. Once you’ve finished playing you can pack the components into the cloth bag and store it virtually anywhere making it a travel friendly game.

It is a game that will not be for everyone, however, when used for the right reasons during a game night it absolutely has a place and yes, the game will have you roaring, stomping your feet, blowing imaginary flames of fire from your mouth as you walk around the board causing havoc to whoever may be silly enough to stand in you path. So, for these reasons it is recommended.